Just two short years ago,  your mother starting having contractions. In her own words:

“2 years ago today I went in to get a prenatal chiropractic adjustment. As I was driving to work I noticed that Ronin was really starting to move around and do what I called at the time: ‘a weird stretch’. I got to work and began welding but I was really tired and my back was killing me. I would have to stop every once and a while and sit down. My boss kept asking if I was ok and I told him I was just really starting to feel over pregnant. I finished out the day at work as usual and told my boss I would see him tomorrow.

When I got home Ronin did that weird stretch again and Gabe got to see my belly actually look like a square. I said, see she is acting crazy today! He then asked, do you think these are contractions? I said, no… They have been happening all day. I think she is just moving into position, I did just have an adjustment. At 10:00 Gabe told me that he had timed these “stretches” and that they were 7 min apart. He told me I was in labor. I still didn’t believe him…

By midnight we were both sure I was in labor as the contractions were now 4 min apart.

Looking back on that day 2 yeas ago I realize now how oblivious and crazy I was!! I was in labor for almost 24 hours but only knew it for about 7″

This reminded me that we had actually used an app to time the contractions. Sure enough I still had all the data! So to commemorate the day, here is a little chart: 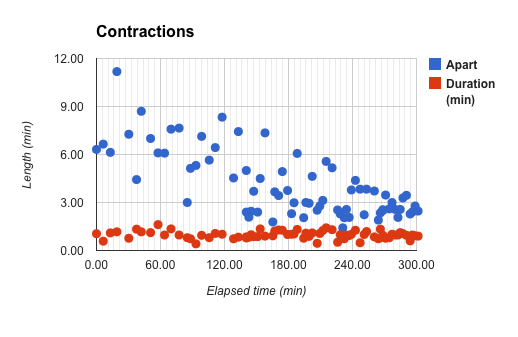 The data ranges from approximately 10pm on June 20th – 6am on June 21st. As you can see, everything started happening rather quickly. By 8am we were out the door, driving like mad. At 8:40am, you entered this crazy world.

One Response to Two years ago…